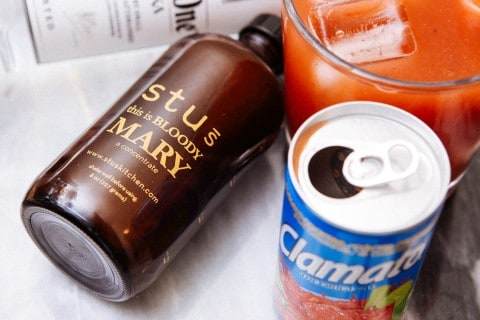 Ever wanted a more ocean-friendly tomato-based cocktail? Well, friend, you’re in luck..let me introduce you to the Bloody Caesar! Also known as a Clamato bloody mary recipe.

Like the Michelada, the red beer and Virgin Mary Drink, A Bloody Caesar is another refreshing variation of the savory Bloody Mary cocktail.

The Bloody Caesar, also know as just a Caesar, was invented in 1969, and is most popular in Canada where it was invented. In fact, Canadians drink more than 350 million Bloody Caesar’s every year and there has even been a petition to make it Canada’s national mixed drink.

Just based on appearance, a Bloody Mary and a Bloody Caesar are nearly identical.

The bloody mary ingredients and bloody caesar ingredients both contain the primary ingredients of vodka, tomato juice, and a blend of spices. They are both served over ice in a celery salt-rimmed glass. They’re both usually garnished with a stalk of celery and a lime wedge.

But what distinguishes a Bloody Caesar from a Bloody Mary is the addition of clam broth / clam juice. This is the key ingredient that gives a bloody caesar a unique flavor all to itself.

As we mentioned above a Bloody Caesar’s primary ingredients are the following:

The History of the Bloody Caesar Drink

The Bloody Caesar Drink was invented in Calgary, Alberta, Canada in 1969 by restaurateur Walter Chell.

Walter, a restaurant manager, was inspired to create a new signature drink to help celebrate a new Italian restaurant, the Calgary Inn, opening in the city.

According to Walter Chell, the idea for the clam juice ingredient in the drink was inspired by Italy. Chell recalled that in Venice, they serve a popular Italian dish, Spaghetti, and clams. He reasoned that the mixture of clams and tomato sauce would make a good drink, and mashed clams to form a “nectar” that he mixed with other ingredients.

He imagined that the combined mixture of the clams and the tomato sauce could make a for a delicious drink. So he muddled and mashed some clams to form the clam “juice” that he mixed with all of the other ingredients.

And the Bloody Caesar was born.

Popularity at the restaurant was instant and within five years the drink had become the most popular cocktail in Calgary.

The 40th anniversary of the Bloody Caesar came in 2009 and to commemorate the mixed drink Calgary, Mayor Dave Bronconnier declared May 13, 2009 as Caesar Day in the city.

While we can’t overstate the popularity in Canada, the drink could use some marketing because it can be difficult to find outside of our friends from the North. If you go to a bar and ask the bartender for a bloody Caesar, you might get a strange look.

Just like the bloody mary, equally as important as the ingredients is the ratio.

The drink should be customized to your preferences but if you’re not sure where to start, use the 1-2-3-4 rule.

That will give you a good bloody caesar mix.

But if you really want to step up your game use STU’s Bloody Mary Mix and all the work is done for you. No need for all the ingredients and money and time. Just add an ounce of Stu’s for every three or four ounces of your Clamato Juice.

Serve over ice in a highball glass (pint glass) rimmed with celery salt. or a mixture of salt and pepper and garnished with a celery stalk and lime.

Here’s the most Canadian version, sent in by our customer Mike S. 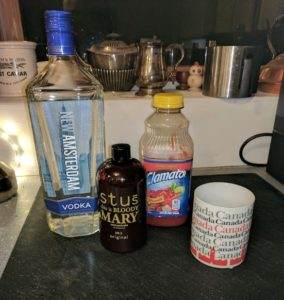