How to Make Vodka 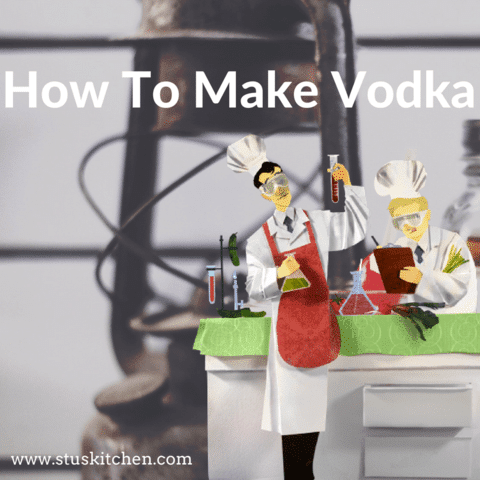 How to Make Vodka

The creativity that comes along with making a bloody mary goes deeper than what garnishes you use or ingredients you include. If you’ve worked your way up to being a bit of a connoisseur, or you just want to experiment, it might be time to make your own vodka. Of course, it doesn’t have to be made just for bloody marys, but we’d be remiss if we didn’t mention it.

Our friends over at WikiHow have provided an excellent resource to teach us how to make vodka, which is why we’ve chopped it up and provided it here for you!

This guide on how to make vodka is designed to give you some of the basic tips on how to create your own batch. We hope this inspires you to experiment with trying to make vodka at home.  And eventually start to experiement with creativity, like Bacon Infused Vodka.

How to Make Vodka At Home: Choosing Ingredients

Vodka is commonly made from wheat, rye, barley, corn, or potatoes. Sugar and molasses can also be used alone or added to other ingredients. Whatever you choose, it must have sugars or starches so that alcohol is ultimately produced.

Feel free to introduce your own ingredients to change and enhance the flavor of your vodka. Yeast eats sugars or starches and spits out alcohol and carbon dioxide.

Depending on your mash ingredients, decide whether you need to use additional enzymes.

Food-grade amylase enzyme powder can be purchased from a homebrew shop and added to the mash to convert the starch into fermentable sugars, if you’re using something like potatoes, for example. Use the recommended amount for the amount of starch to be broken down. There is no need to use malted, enzyme-rich grains such as malted barley or wheat when using enzyme powder.

For enzymes to be able to break down starches, even the starches of malted, enzyme-rich grain, the starches must first be gelatinized.

Flaked (rolled) grains are often already gelatinized. Un-gelatinized ingredients such as potatoes and unrolled or malted grains are heated in water to the gelatinization temperature of the particular starch that is used. Potatoes usually gelatinize at about 150° F (66° C), while barley and wheat gelatinize at about the same temperature. Theoretically a potato mash should only need to be heated to 150° F (66° C), anything over 165° will destroy all the enzymes. If a low temperature is used with potatoes, the potatoes should be finely shredded before adding them to the water. 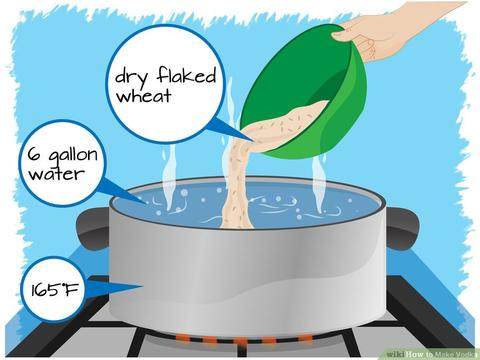 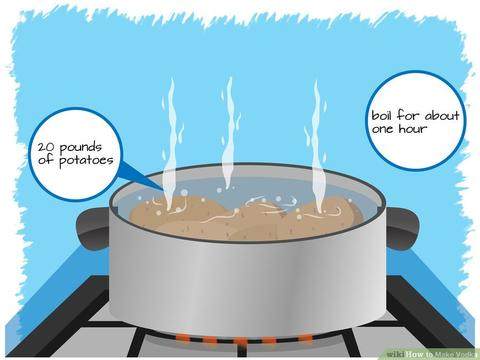 “Try a potato mash. Clean 20 pounds of potatoes. Without peeling, boil them in a large kettle until gelatinized, about one hour. Discard the water and thoroughly mash the potatoes by hand or with a food processor. Return the mashed potatoes to the kettle and add five to six gallons of tap water. Mix to blend and bring mixture to just over 150° F (66° C). Add two pounds of crushed, malted barley or wheat and stir well. Cover and stir periodically over the course of two hours. Let cool overnight to 80° – 85° F (27° – 29° C). 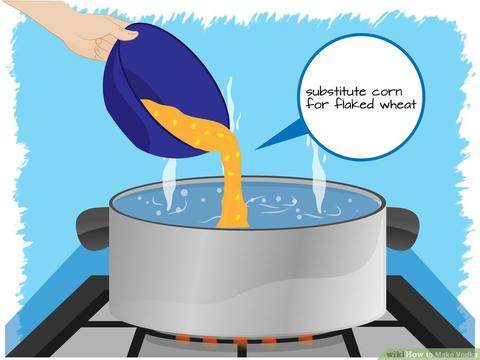 “Try a corn mash. Make a mash according to the wheat mash recipe, but substitute flaked, pre-gelatinized corn (maize) for the flaked wheat. Alternatively, sprout your own corn over the course of three days and make a mash from it without added malted grain. A root about two inches long should sprout from each grain. The sprouted corn will contain enzymes that were formed during the germination (sprouting) process.”

Clean all your utensils and prepare the area properly.

Fermenting is the next step when learning how to make vodka. Fermentation is conducted in clean, sanitized vessels that are sometimes open but often sealed from the air to prevent cross-contamination. Fermentation usually lasts for three to five days. It can be done in unsanitary vessels, but is not recommended.

Oxidative cleaners such as ‘B-Brite’ are available at homebrew shops, as are sanitizers such as iodophor.

Choose and set up your airlock.

An airlock is a mechanism that will allow CO2 to escape without letting O2 to get in. Five gallon batches of strained mash can be fermented in a 7.5 gallon food-grade bucket or in 6 gallon carboys.

Lids can be affixed to buckets, as can drilled rubber stoppers to carboys, but when using a lid or a stopper, never seal the vessel completely, as pressure from carbon dioxide production will create explosive pressure. Therefore, affix an airlock to lids and drilled rubber stoppers. If possible, avoid fermentation in an open bucket.

Strain the mash or liquid into your fermentation vessel.

If a mash was made, strain the liquid with a fine mesh strainer from the mash into your cleaned and sanitized fermentation vessel. Try to splash the liquid and pour it from a distance so that it is well aerated. Yeast needs air (oxygen) initially to grow and start a quality fermentation.

As an alternative, ferment the mash without straining. However, the fermented mash should still be aerated in some manner, possibly with an aquarium air pump and an aeration stone. The mash will also need to be strained before it is added to the still, and it may be more convenient to ferment the smaller volume that results from a strained mash, as the fermenting mash may overflow the vessel.

If juice is to be fermented, aerate by pouring from a height through a sieve or strainer into the fermentation vessel.

Add yeast to the fermentable medium.

Hydrate the appropriate amount of dried distillers or other desired yeast and add it to the liquid. Stir with a clean, sanitized spoon to evenly disperse the yeast.

If using an airlock, the airlock will bubble during active fermentation, and the bubbling will slow dramatically or cease altogether as the liquid becomes completely fermented. Keep the fermenting liquid in a room that is about 80° – 85° F to facilitate good, efficient fermentation. Alternately, use a heating belt in cold areas.

Siphon off the fermented, alcoholic liquid, or ‘wash’ into a cleaned and sanitized vessel or into the distillation apparatus. Leave the yeast sediment behind in the fermentation vessel, as it can scorch when heated in the still.

Column Flute Stills are a bit more complex than pot stills and are ideal for distilling an odorless, flavorless and higher proof spirit such as vodka.  They can be purchased or, depending on the still design, built using readily available materials.

However, column stills and pot stills work in a relatively similar manner:

Simple pot stills are akin to pressure cookers that are attached to piping or tubing.

They can be constructed very easily and cheaply. Unlike column stills that are essentially vertical columns, pot stills may utilize bent or coiled tubing or piping that can be submerged in a vessel of cooling water. Pumps and large volumes of cooling water are not required but can be used.

Get ready for distillation.

Stills heat the fermented, relatively-low alcoholic wash to a temperature that is greater than the boiling point of alcohol, yet less than the boiling point of water. In this way, the alcohol vaporizes while the bulk of the water does not. The vaporized alcohol (along with some vaporized water) travel up into the column, pipe or tube of the still. External cooling in the form of cold water is applied to the column, pipe or tubing, causing the vaporized alcohol to cool and condense back into liquid.

This alcoholic liquid is collected and becomes vodka.

Heat the wash in the still to begin the distillation process.

Depending on the type of still being used, gas burners, wood fires, or electric hot plates are all options. A temperature of about 173° F (78.3° C) at sea level is desirable, but the temperature must be kept below the boiling point of water, 212° F (100° C) at sea level. As the wash becomes heated, alcohol and other substances vaporize and condense in the water-cooled area of the still.

Throw out the heads.

The first distilled liquid, ‘the heads,’ that is recovered from the still will be rich in harmful methanol and other volatile chemicals that you don’t want to drink. For 5 gallons (19 l) of wash, discard at least the first 2 ounces (60 ml) of distillate.

After you discard the heads, the collected distillate will contain the desired alcohol (ethanol), along with some water and other compounds. This is called the “body”. During this time, if using a column still with flowing cold water, the water flow can be adjusted to control the distillate output and purity. Try to shoot for two or three teaspoons of distillate per minute. Increased distillate output results in decreased purity.

Throw out the tails.

Check the alcohol content and purity of the distillate.

Treat with a carbon filter if necessary.

You are almost done learning how to make vodka!

Pass the distillate through a carbon filter, such as those available at homebrewing shops, to remove unwanted volatile flavors and aromas. Carbon water filters can also be modified to purify the distillate.

Dilute the vodka to the desired strength.

Fill bottles using a gravity bottle filler setup and cork or cap the bottles. Label the bottles with custom labels if desired. Some gravity fillers may consist of a 7.5 gallon (29 L) bottling bucket (with spigot), vinyl tubing, and a simple spring-loaded plastic bottle filler. Multiple-spout wine bottle fillers can also be used.

We can’t leave out the infusion part in our How To Make Vodka guide. It’s the fun part, where you can let your creativity shine.

Once you have completely finished making your own vodka, consider infusing it with different things to give each batch a different flavor.

This guide on how to make vodka gives you the bare bones tips on how to create your own batch. What it doesn’t do is take your creativity into consideration. Make your own creation! Put some different ingredients in that could change the game for you and your guests. Cater the flavors to how you’re going to use the spirit. If you want to use it in a bloody mary, for example, you could throw a pickle or two in there and give it that sour taste. However you want to do it, make sure you do it your way.