HOW THE PERFECT BLOODY MARY WAS BORN

In culinary school, while other students were setting bananas foster a flambé, Stu (yup he’s a real dude) was in the basement with a magnifying glass and a flashlight, transforming fresh food into fermented oddities. He had developed a passion for preserving foods, and he played with wine, beer, and cheese, and anything else he could get his hands on.

But it that took his heart.

After graduating culinary school, Stu started working at Alinea, rated the 7th best restaurant in the World. It was there that he fully developed his pickling obsession, and his talent proved superior. It seemed he had a gift for transforming fresh, crunchy cucumbers into slightly sweet, fiery sour pickles. But one of his challenges with making pickles was what to do with all that extra brine.

Over one day, one of his friends was complaining about the blandness of his Bloody Mary, when inspiration hit. What if you take that amazing pickle brine and add it to a Bloody Mary?

Stu immediately got to work hand-crafting the perfect Bloody Mary. Using his homemade pickle brine as the foundation, Stu perfected his recipe and built the most complex and consistently satisfying Bloody Mary he had ever tasted.

After the enough of his friends sampled his concentrate and gave it overwhelming feedback they urged him to sell it, and, a small side-business was born selling sour pickles and a bloody mary concentrate. Stu’s Kitchen.

A little while later, Stu teamed up with an old college buddy and the pair started sending their sour pickles and perfect Bloody Mary mix beyond the borders of the Windy City.

Over time, that business has continued to grow and evolve into the Stu’s Kitchen of today. It’s still a small family business that’s based on quality ingredients, taking care of our customers, and the American entrepreneurial spirit.

Stu’s is bringing back the art of cocktail perfection, one bloody mary at a time.

We support local farmers who are committed to ethical farming and preserving our precious natural resources. We hand-pack our pickles in season and use fresh, wholesome ingredients from generations gone by.

In the end, pickles are just cucumbers soaked in vinegar, but we love them.
Who We Are 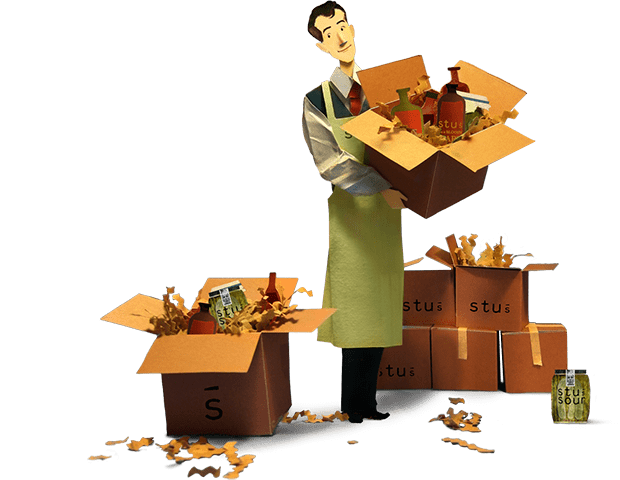